Mushrooms and Toadstools in lawns

During the winter, mushrooms and toadstools are common in lawns. The questions we get asked most are, "Will they damage my lawn? and How can I get rid of them?"

The mushrooms or toadstools that you see in the lawn are the flowers if you like, or more accurately, spore producing structures of some kinds of fungi. For the better part, most of these fungi are beneficial. They feed on organic matter in the soil such as thatch, decaying leaves and tree roots,  breaking this matter down and releasing nutrient back to the lawn.

Mushrooms and toadstools produce spores, which easily blow about in the wind. As the weather cools down, these spores land in and around lawns and germinate, sending out long threadlike strands into the soil called hyphae. 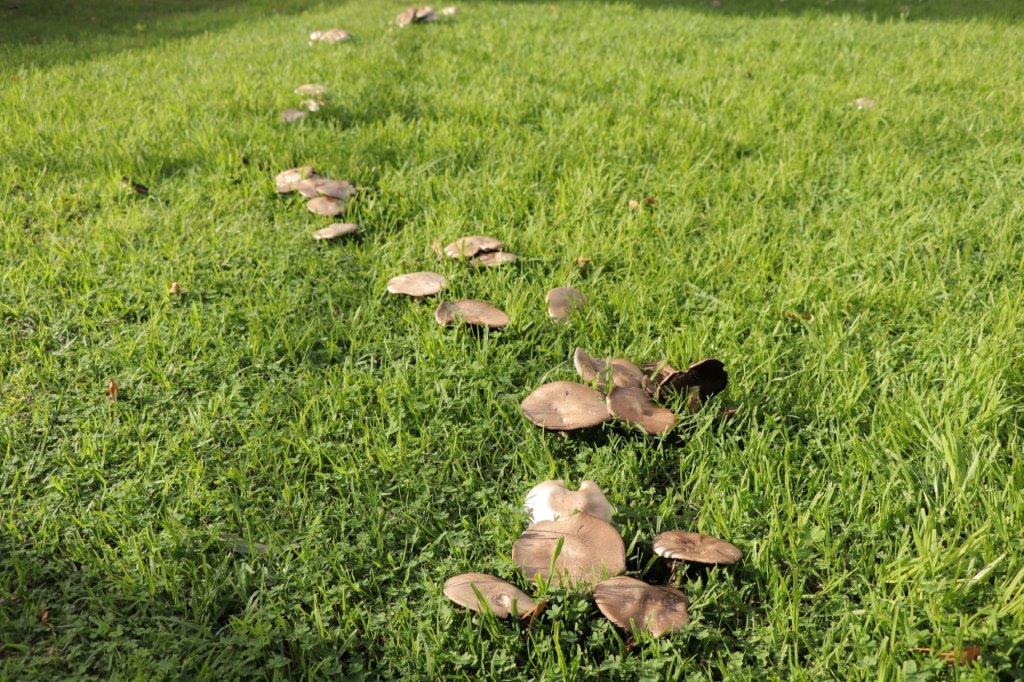 In time, these hyphae bunch together and thicken up to form what is called mycelium which looks like a white cotton substance in the soil. When the mycelium are mature, they send up mushrooms to the surface.  As I mentioned earlier, the fungi feeds on organic material in the soil. It is common to see mushrooms popping up where a tree used to be. I took this photo just last week to demonstrate this effect. Notice the pattern of mushrooms following a line of roots from an old tree.

So how do you control mushrooms in your lawn?

Let me start by saying that the fungi that produce the mushrooms are harmless to lawns. Since they have little effect, you can leave them where they are however if you don't like the look of them or are concerned that they may be toxic, you can remove them. If you want to go about getting rid of them, there are a couple of things that you should know. Firstly, there is no fungicide that will kill them off so the only way to remove them is to physically pick them. Secondly, removing them won't stop them coming back. Since they are a product of the fungi in the soil, new ones will continue to grow while conditions are favourable. One of the best ways to stop them coming back is to remove the food source the fungi is feeding on. If it is a tree root like in the photo, then by removing the root you will most likely remove the fungi too. In circumstances where the fungi is feeding on material like thatch or decaying leaf litter in the soil, it can more difficult to stop mushrooms from growing. In these cases, you may have to resign yourself to continually picking the mushrooms as they appear.

Are there circumstances where mushrooms are an indication of problems?

There is a fungi called fairy ring. Fairy ring is a fungi where as the name suggests presents as a ring in your lawn. The ring starts small and then over time grows - you may notice mushrooms growing in the ring itself. Once again there is no fungicide to control fairy ring but it will in time grow out of your lawn. In the case of fairy ring, the concentration of mycelium in the soil is so thick and concentrated that it can leave your soil non-wetting or water repellent. I would recommend regular applications of liquid wetting agent as the fungi grows out to make sure your soil absorbs water properly into the future.

If you need any help or have any questions, please email me at stefan@paulmunnsinstantlawn.com.au or give me a call on 8298 0555

Reference: Ed Perry from the University of California Cooperative Extension.